"Always Two There Are, a Master and an Apprentice"* 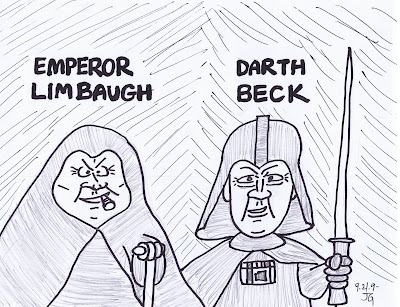 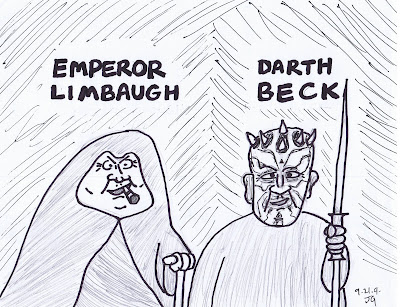 *Yoda - Episode I: The Phantom Menace
Both HSB and Andrew had good, but not quite correct, guesses about the Star Wars themed cartoon about Limbaugh and Beck. So they each get half a star and an honorable mention. By the way, keep the ideas coming, I may use them here in the near future.
An article on Politico.com titled Glenn Beck vs. Rush Limbaugh inspired the above cartoons. I couldn't decide which one to go with so I drew and posted both, although I think I like the Darth Maul one best, what do you think?
What made me think of the Star Wars theme cartoon idea regarding Limbaugh and Beck after I read the Politico.com article? Answer: Limbaugh and Beck are two peas in a pod, with Beck copying and learning from the master of fear mongering, Limbaugh. Beck's modus operandi is almost a step by step recreation of Limbaugh's early ventures after Bill Clinton was elected. For example:
1) TV and radio show? Check. (I remember when Rush had a TV show in the early 90's)
2) Write some books? Check.
3) Criticize a new Democratic president's every move? Check.
4) Pander to the least common denominator through lies and fear mongering? Check.
5) Laugh all the way to the bank? Check.
And that's the thing, both Limbaugh and Beck are experts at fear mongering. The Politico.com piece quotes a GOP strategist that says that Dems and Limbaugh should be afraid of Beck. I think not.

Quick thoughts on why Dems are not/should not fear Beck is that he, like Limbaugh, thankfully appeals only to the hardcore GOP base. And Limbaugh shouldn't be afraid because, let's face it, he's Limbaugh and is still in a league all his own when it comes to inspiring fear.

One last thing that the above cartoons made me think of given both Limbaugh and Beck's use of fear as their stock in trade:
“Fear is the path to the dark side. Fear leads to anger. Anger leads to hate. Hate leads to suffering.”
-Yoda, Episode I: The Phantom Menace
Side Note: I've noticed on the comments sections of many articles folks expressing their worries and fears at the tone of some protesters.

Then, the response from some is that "liberals" don't believe in free speech when people are criticizing a Democratic president. That's not quite correct.

Let me point out the fact that those extreme, wingnut protesters can freely express themselves, albeit in vulgar and hateful ways, demonstrates that the freedom of speech is alive and well in the USA. Protesters can actually compare Obama to Hitler, for example. It's actually protected free speech. I get that. "Liberals" get that it's protected speech. But, folks can also express their thoughts about that type of hateful, extreme speech. You see, it's a two way street.


Some don't seem to understand that if they are going to express an extreme or false or hateful sentiment others also have the right to express their thoughts about those who would express extreme or false or hateful sentiments. It's called the marketplace of ideas. In fact, I really believe the more some people, like wingnuts, express themselves, the more they are revealed to be extremists, alarmists, delusional and hateful for hate's sake and therefore hurt their "cause" or "causes". By the way, some of those extremists seem to follow fear mongering talking heads like Limbaugh and Beck (there's the tie in to the above cartoons).

Here's another example, wingnuts can express their belief that Obama was born in Kenya. And I can express the view that those "birther" wingnuts are sad, delusional morons. The wingnuts have the right to express themselves freely and so do folks, like me, that want to criticize them. Ain't it great?
post by JG at 7:00 AM