"...I'll Be Here Until You Vote Me Out!" -
fake quote from Governor / comedian Rick Perry 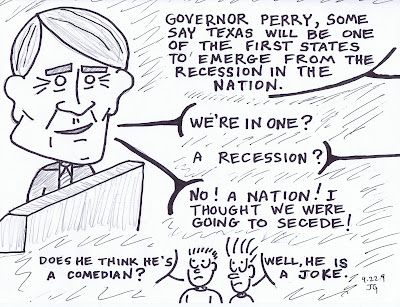 In case you didn't hear, Gov. Perry made a joke about the recession.
Apparently, according to Gov. Perry it's OK to joke about the worst economic downturn since the Great Depression. The recession is no laughing matter to Texans and Americans suffering the affects of the the economic downturn. People have lost their jobs. Companies have gone out business. And, yes, that is happening in Texas too. Perry again demonstrated his remarkable ability to discount, marginalize and make jokes at the expense ordinary people and voters.

Side Note / Question: Are we looking at a "the lesser of two evils" decision for governor in Texas between Perry and Sen. Hutchison? And is Sen. Hutchison really the lesser? At least she's against toll roads everywhere, all the time. That's about all I know regarding the differences between the two, otherwise I need to educate myself on where Hutchison stands on different issues.

And I am just now educating myself on the Democrats running for the nomination. Any insight into the Dem candidates would be appreciated. Is there already a "front runner"? Are they going to be another sacrificial lamb put up for the slaughter?