Some Thoughts Before the Weekend On: Racist Witch Doctor Posters; Tea "Party" ; Beck vs. Limbaugh; O'Reilly Shocks; Dems Push Back

Some things that got me thinking that you may be interested in checking out before the weekend:
First, a CNN piece discussed posters depicting Obama as a witch doctor seen at the 9/12 protest in D.C. with some discussion as to whether the posters(and those holding them) are racist. This is not the first time this poster has made news. I made my thoughts known regarding this racist poster here on PTN way back in July. Think of it this way, what kind of posters would they be carrying if the president were Mexican-American? Jewish American? Asian-American? Or, gasp, of Middle Eastern descent? Sure, using stereotypes for a race or ethnic group happened often to Irish and Italian Americans(see below), for example. But, that was during the late 1800's and early 1900's for the most part.
(anti Irish propaganda titled The Usual Irish Way of Doing Things, from Harpers Weekly) 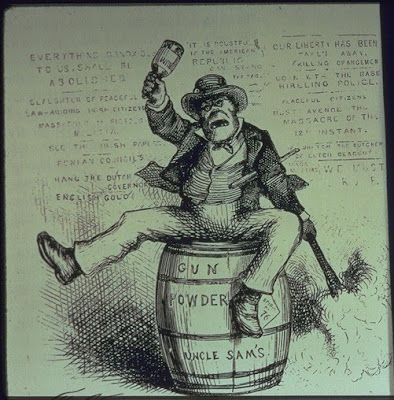 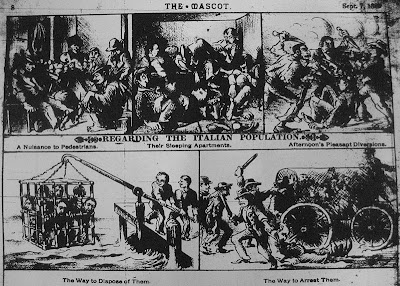 Moving on, Time did an article about Glenn Beck (I still don't understand how people can take him seriously). Time! How much more mainstream media (or "MSM", that's what some conservatives call "mainstream media" even though "mainstream" is one word so it should be MM, jeesh, they can't even get initials right) can you get? Remember, Beck trumpets the Tea Party. Beck was behind the 9/12 protests. Look at Beck's site the912project.com, if you scroll to the bottom it's owned by Mercury Radio Arts, Inc., Beck's company (by the way, and I'm sure someone's already called him out on this but, really classy on Beck's part using the terrorist attacks on 9/11 to help promote his 9/12 protest attended by at least some wingnuts). Here's a thought, if the Tea Party is going to continue to call itself a "Party" that means it should put up its own candidates. Would a real third party in the form of the Tea Party be a bad thing? I would think it would be a good thing for the Dems and a bad thing for GOP'ers. Why? Do you think Dems would lose votes to a new Tea Party political party and its candidates? Or would GOP'ers? Or if GOP'ers embrace Tea Party ideas how many independent voters do you think they'll get? Remember, only about 30-35% of Americans consider themselves Republicans. Also, recall if you can the Independent Party when Ross Perot ran for prez in 1992. How did that work out for H.W. Bush? OK, I'm done ranting about this.
Next topic, Politico.com has a piece about Beck vs. Limbaugh (oh, don't worry, there's a cartoon forthcoming about that, it'll be Star Wars themed, if you guess the general idea of the cartoon you get a gold star from yours truly and a mention when I post the cartoon). In the piece a GOP strategist says that Dems and Limbaugh should be worried about Beck. I disagree, see my thoughts above regarding what an actual Tea Party as a political party would mean for the Dems. And not that I care one way or the other but, Limbaugh has nothing to worry about regarding Beck's popularity.
Also, Bill O'Reilly is for the public option?!?!?! (spit take, shake head, rub eyes, pinch self) OK. Kinda. Maybe. HuffPo has the actual conversation O'Reilly had regarding the public option on its site.
And lastly, the Dems are actually pushing back against some of the outlandish assertions being made about health insurance reform through a new site. Well, would you look at that? The Dems finally got hit enough in the nose on this (death panels for example) that they finally decided to stand up for themselves. This is what it must feel like for a parent when their kid stands up to a bully.
post by JG at 12:00 PM