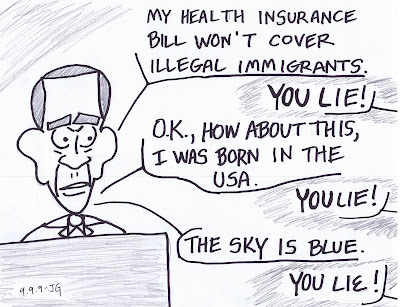 Here's the actual video of Representative (and moron wingnut) Joe Wilson (R-SC) heckling the President of the United States of America by yelling, "you lie."
After this moron Joe Wilson heckles President Obama make sure to notice the looks on VP Biden and Speaker Pelosi's faces. If someone makes Biden look down and shake his head in disgust then that person is truly an idiot. And apparently Wilson immediately called Rahm Emanuel after the president's speech to apologize. I would have loved to have listened to that conversation.
What if a Democrat had done what Wilson did during one of W.'s speeches when he was feeding us a pile of lies regarding Iraq? What would the GOP's reaction have been? The nation's?
Some hyperbolic, fanatical, fear mongering liars oppose health insurance reform. Apparently Joe Wilson is one of them. If you like the above cartoon and think it exposes some of those opposed to health insurance reform as lying wingnuts please email it along to others by clicking the envelope below.
(the above is featured at DallasSouthNews.org - check it out.)
post by JG at 10:40 PM