Lies and Ugliness: the 9/12 Protest 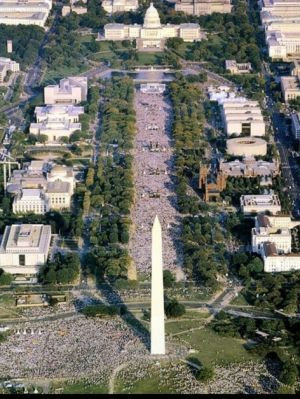 The above is a fake picture of the 9/12 protest

held in DC that has been circulated by wingnuts lying to others and themselves about their "movement" being a grassroots one and a mainstream one.

It's not a grassroots movement in that it was called for and organized by Glenn Beck, the Glenn Beck who works for Fox News and is in the business of using crazy talk and fear mongering to promote books, ad time for his TV and radio show and himself generally in order to make a boat load of money.

It's not mainstream in that I genuinely don't believe most people believe what these folks believe (I believe it's a small percentage of the GOP/conservatives, but that's only my opinion). You had the usual wingnut communist, socialist, death panel, nazi and birther type signage, for example.

It's fake in that the pic is of a gathering from at least before 2004 because a building built in 2004 is missing from from the photo. Some wingnuts were/are claiming that over a million people showed. Actually, about 70,000 showed up.

They are protesters and they are exercising their right to free speech which is eye opening because it reveals their views as not mainstream and proves that at least some are wingnuts. Check out photos from the 9/12 protests to see what exactly some were saying. I have no problem with them exercising their right to free speech, at least now we know what some think/believe. Ugly. Ignorant. Sad. But, it's protected free speech (except some of the signs like this one that seem to threaten violence, that's not protected free speech if memory serves).

In fact, in order to "help" spread their "message" please feel free to pass this along to others so that these people's wingnut views are made clear and hopefully they become even more marginalized.

Lastly, tell me and others what you think. Please leave a comment. I generally leave the comments off posts but maybe some would like to express their thoughts on the above, especially the photos.

Related Posts:
Sadly, this is not a new phenomenon, want to see some wingnuts from the 2008 prez campaign?
Check them out here.
Or what about the McCain supporter who told McCain Obama was a Muslim?
What about the birther wingnuts?
Wonder where these folks get their ideas? Besides from Glenn Beck and Rush Limbaugh?
Sometimes it comes from elected officials like Rep. Bachmann (MN-R).
My past thoughts/cartoon on health insurance reform town hall meetings with legislators.
The more things change the more they stay the same.
post by JG at 7:00 AM