Invasion of the Hair Aliens! 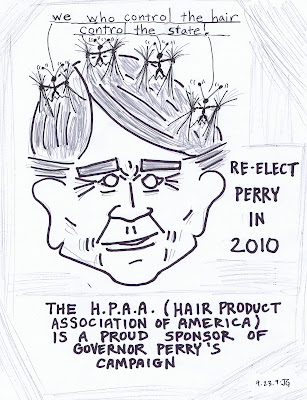 The above is at best absurd and at worst (probably) just plain dumb. It is what it is.

Want to know more about how/why my brain came up with the above?
OK, you've read so far... It was inspired, in part by the twitter feed I read about (and now follow) a while back GovPerrysHair. Essentially, according to the twitter feed, Perry's hair has a mind of its own. That, for some reason made me wonder about who or what might control Perry's hair. Thus, the "Hair Aliens". Next, I thought of the quote from Dune, "he who controls the spice controls the universe." And that's how I came up with the cartoon. At least in reference to the Hair Aliens. Otherwise, Perry just looks like he takes too much time on his hair, thus the endorsement at the bottom. And yeah, I'm still trying to figure out how I got to the Hair Aliens and Dune quote.

More or less from the Hair Aliens in the future?

Click here for more of the ongoing saga of the Hair Aliens.
post by JG at 11:00 PM