Signs that Team USA was maybe not so good:

1. Prior to the game against us Ghana had scored 2 goals all World Cup, both on penalty kicks; they scored two goals against us.
2. How many goals in the first 0-20 minutes are we going to give up?
3. Other teams seem to have "scorers".  And by that I mean players that just seem to bury the ball in the back of the net when they have a good chance; how many great chances did the USA waste?  With at-em balls (right at the goalie) or just wild misses?
4. We tie England on a fluke shot on goal that hit their golie square on.  England then gets their lunch handed to them 4-1 by the Germans.  Maybe that tie against England wasn't that great after all.
5. In the elimination game against Ghana the coach made an early first half substitution, all but admitting that the USA coach started the wrong guy.  Plus, after a half time formation adjustment the USA played in the Ghana end all second half.  As opposed to the first half, where the Ghana team was playing in the USA defensive end even though Ghana was in a supposed defensive formation.
post by JG at 11:01 PM No comments:

First the USA vs. UK highlights Legos-style:
And a great front page: 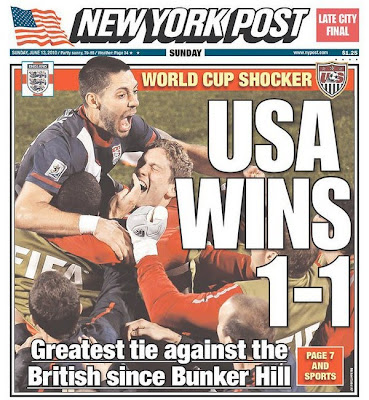