Newspaper Ad Hopes For Obama Assassination - I'm Not Joking, Believe Me I Wish I Was

The below ad appeared in the Warren Times Observer, a paper in Pennsylvania: 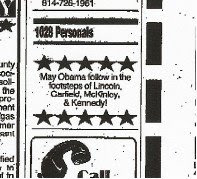 The Secret Service is investigating. But, here's a question, why would any newspaper agree to run such an ad? The publisher of the paper claims they didn't understand the sentiment of the ad. Really? That's the story the publisher is going with? I guess the publisher really can't say anything else . The publisher either has to claim ignorance or essentially say that they didn't think there was anything wrong with the ad. But, surely someone working at any newspaper would know what Presidents Lincoln, Garfield, McKinley and Kennedy have in common. Or maybe this publisher's ignorance is the exhibit "A" demonstrating why print media companies and newspapers in particular are going out of business.
From thehill.com.
post by JG at 6:55 AM