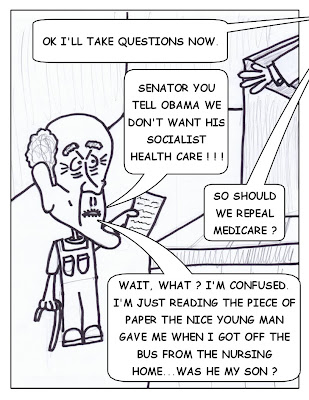 (or alternate title: It's Health Insurance Reform not Health Care Reform)
I know the above is mean. It is what it is.
It's health insurance reform, not health care reform, we are debating about. Let's be clear about that. No one's arguing we should change/reform the way we train our doctors and nurses in America are they? You see, most people have no problem with the health care they receive. The problem occurs when people don't have access to health care because they don't have health insurance. So what is being contemplated is health insurance reform.
Don't let the wingnuts frame the debate. Who likes health insurance companies? Not many. If you frame the debate as reforming health insurance there's a chance of convincing those on the fence that we actually do need health insurance reform. President Obama has tried to frame the issue as such. Others need to do so as well. The Dems, including Obama, have done a terrible job of combating the misinformation out there to date. Just remember, we're debating about health insurance reform, not health care reform.
Want to read more on the lies regarding health insurance reform? Click here.
By the way, guess who wants no health insurance reform at all? If you said health insurance companies and fake GOP "grassroots" groups you get a gold star.
And let me ask some other questions:
Why is anyone listening to Palin and her "death panels" nonsense? What's funny is that the provision Palin is mischaracterizing most likely will not be in the final bill. This is Palin remember? She's the one who reads all the periodicals, sees Russia from Alaska, and quit her job. Maybe she doesn't understand that any health care provider makes decisions as to what care they'll pay for. Does Palin think insurance companies don't have actuarial tables read by insurance agents that decide who receives what care and when? Would those be "Insurance Agents of Death" according to Palin?
Speaking of health insurance companies...are health insurance companies out to give you the best health care they can?
Or are health insurance companies, like any insurance co., in the business of collecting premiums and denying claims/benefits in an effort to maximize profits? (To quote from the greatness that is The Jerk, "Ahh, it's profit deal.")
Government backed health care like Medicare, Medicaid, health care for our armed forces and those in the Senate and House of Representatives is a good thing right?
But, offering a viable, government backed option to the roughly 50 million Americans without health care is bad? Really? Really?
And I'm tired of hearing about how much it's going to cost from Blue Dog Democrats and GOP'ers. How much did we spend (are we still spending) in Iraq again?
And where do all those folks yelling at the town hall meetings get those papers in their hands? Who's funding this "grassroots", town-to-town, bus tour called "Hands Off Our Health Care"? Where are the hard hitting journalists investigating who exactly is funding this bus tour? (FYI, unlike some other bloggers, I, in no way, consider myself a journalist.)
"Hands Off Our Health Care" sure sounds like something an insurance company would say doesn't it? Maybe someone should look into that. Just a thought.
Check out their ride: 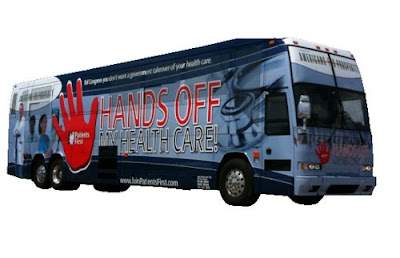