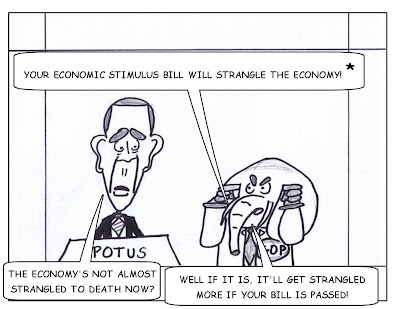 * "Your economic stimulus bill will strangle the economy." This is borrowed, in part, from Sen. Jim Demint of South Carolina who said on the floor of the Senate that Pres. Obama's stimulus bill, "will not rescue our economy, it will strangle it." Apparently Sen. Demint seems to think that the economy is breathing A-OK right now. Out of touch much?
http://obama.wsj.com/quote/0bkq5R16k10Va?q=Jim+DeMint
GOP, Obama, Political Cartoon, President, Republican
post by JG at 6:00 AM