- The Gift That Keeps on Giving 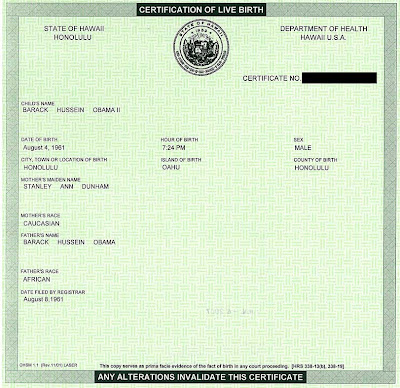 or alternate title, what more do "birthers" want, the above was issued by the State of Hawaii, and says that this document is evidence of birth in any court proceeding. Oh wait , I forgot, they can explain this away too, this document was obviously forged and planted by an Obama operative or operatives; or this conspiracy involves dozens of people dating back to the President's birth or; someone traveled back in time and altered the birth records to show he was born in the USA; or Hawaii wasn't really a state when he was born there because their admission into the Union was unconstitutional or; [insert any explanation other than the most simple].
First, I' m addressing this only because of the attention it's received from mainstream media. Moreover, for all those that say "the media" has a left bias I guess you don't include Fox News
and CNN as "the media".
I don't have much of an opinion regarding the "birthers" quest to kill their own personal windmills other than it reminds me, as it reminds others, of other fairly recent conspiracy theories. Let's not forget about the 9/11 conspiracy theory that in some way the Bush administration ordered the attacks on the towers or the conspiracy theory that the Clintons somehow orchestrated the death of Vince Foster. Case in point, one of the original leaders of the "birthers" is attorney Philip J. Berg who filed lawsuits on behalf of 9/11 conspiracy folks.
For whatever reason it seems that usually the party out of power has to deal with a fringe movement that advances a theory that flies in the face of the evidence presented to date. And those in the fringe movement focus on that theory with a tunnel vision that stops them from reasonably evaluating any evidence that rebuts their beliefs. They cannot accept that sometimes the simple, straight forward explanation is in fact the true one.
Lastly, like many other recent red herrings for the GOP dating back to the campaign(Obama is Muslim, he's anti-American, he pals around with terrorists, Obama doesn't wear a flag pin, Obama is a socialist/communist) here's the GOP's problem: The GOP's numbers are dwindling so they have to try to appease this group because, let's face it, they don't have many "groups" left in their party right now.
So, here's another conspiracy theory for you from yours truly: The Dems are letting this "birther" conspiracy theory fester because they know the GOP has to deal with these wingnuts and the Dems don't. Why address a non-issue that's hurting your opposition's base and not yours?
Sidenote: Wanna go down the rabbit hole further? What if McCain had been elected, would there have been anti-McCain birthers(note, McCain was born in 1936 in what at the time of his birth was the U.S. controlled Panama Canal Zone on a military base)? I'd have to say, "you betcha!"
Side-sidenote: The National Review, one of the most, if not the most, conservative periodicals going today has even written that the "birthers" are wrong.
post by JG at 1:00 PM