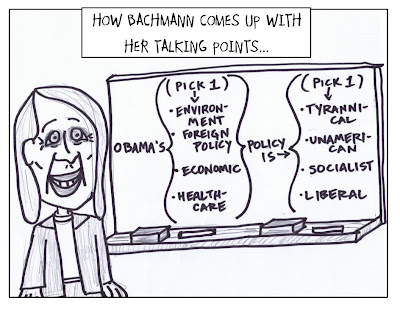 Not only has Rep. Bachmann (MN) claimed that Obama's environment bill is tantamount to "tyranny," but she also wanted to remind those who listen to right-wing radio that Thomas Jefferson thought, "having a revolution every now and then is a good thing." Jefferson, of course, was talking about armed revolution immediately after our independence from Britain. That was certainly a different time. It was not a time and place like today where people are killing those with whom they disagree, like certain doctors, those at armed forces recruitment centers, or those at Holocaust museums. One would like to think that Rep. Bachmann wouldn't fan flames on the far fringes of the right, fires that apparently are already burning well enough on their own. But, that would assume that Rep. Bachmann thinks. And that's an awfully big assumption.
Side note: This is not the first time Rep. Bachmann has made wild, sensational, unsubstantiated allegations apparently in an attempt to keep her name in the media and especially among the far right ring media. For example, during last year's election cycle she sounded like she was channeling the ghost of Joseph McCarthy.
post by JG at 9:30 AM