So me and my good friend Charles have a podcast called “Jav and Charles Talk Comics” and surprise, surprise we talk about comic books. I suggest something for him to read, he suggests something for me to read and then hijinks ensue during our podcast. Please check it out:

In the movie, Thanos’ motivation is lack of resources, which leads to suffering and death. BUT, with all the Infinity Stones he’s nearly omnipotent. Meaning instead of killing half the population of the universe he could just as easily (with the snap of his fingers) doubled the universe’s resources. Boom! Problem (lack for resources) solved. It seems like the writers could have had some type of explanation as to why Thanos’ only option was to kill half the universe instead of just creating more resources. Just sayin’.

Is my criticism valid? I think so. Do you agree? Disagree? Let me know.
Just curious if anyone ever comes to this site anymore. I'm just posting this here since I thought of it and wanted to jot it down.
post by JG at 4:05 PM No comments:

18 People in Line for the Presidency (Hillary could be #2)

A whole lotta hand wringing over these recent lies about meeting with Russians and how it will be the end of the Trump administration.

I don't think Trump will be impeached, especially not with this House and Senate (spare me the illusion that the Republicans will choose country over party). Resignation could be a possibility, but I'm not sure Trump's ego will allow him to do that.


Intent is key. Junior, as a surrogate of our sitting president, met with Russians (you know there had to have been more than the one person) because he thought it would help his father's candidacy.

I don't care if this Russian attorney had no sway.  Junior thought the lawyer did. And Junior was deathly afraid that the video of his dad's really, really, really small hands in a weird video from a Russian hotel room where he was playing patty cakes with an unnamed person with much larger hands would come to light.

Impeach you cowardly Republicans, you GOP'ers that claim to be a party of Reagan much less Lincoln.

BOOM.  GAME OVER. Next question, when did Senior, POTUS, know about the meeting?

And, all the Republicans in office now, if you don't move to impeach immediately, may history be more kind than the electorate next term.

I interact with a number of conservative minded people and one of their main complaints is how the liberal media is pushing their agenda with a liberal narrative.

Why our POTUS has already committed offenses worthy of impeachment:

Let's preface this by stating the facts since he has been in office... - Attempting to intimidate a former head of the FBI by threatening that there are and/or were tapes of the conversations the POTUS had with said former FBI director Comey.

And that's enough.  The way it shook out, as I see it, Trump said I have tapes - in an attempt to silence Comey. BACKFIRED. Little known fact, Trump once was married to a little person from Russia when he went to a bachelor party in in his 20's. He claims he got divorced but, others say, no! He didn't have any tapes-or if he did he burned them. But regardless, he tried to intimidate the ex-FBI head. HE DID!!! He attempted to obstruct justice. Period. And he's a known small handed person who likes drinking urine from the mouth of a certain foreign leader. It sounds like a weird soap opera, right? Good, it should...it's just getting started. He is confused and his wife won't hold his hand. And I may start posting again more...if if get enough likes or shares...otherwise I don't know if any one is watching or reading. I'd like to think that we, as a society, still read. That said, please like or share or otherwise. I am needy...so very, very, very, needy. I cannot explain it. It's like a pit in my torso physically and metaphysically in my soul...Whah...just let me know if you want more of my rants...
post by JG at 1:16 AM

Guardians of the Galaxy 2 = Empire Strikes Back. Well not exactly but here are 11 plot points in common...

1. The "team" splits up.
Quill, Gamora and Drax go on a trip without Groot and Rocket. Just like Han, Leia. Chewy and C3PO went on their own adventure while Luke and R2D2 went to hangout out with Yoda.

2. There's a big chase scene through an asteroid field.  Pretty simple, but there are asteroid chase scenes in both movies.

3. One team hangs out in a natural forest after their ship crash lands there.
Rocket, Groot and Nebula are in the forest repairing their damaged ship.  Luke and R2D2 are on Degobah where they crash landed.

4. While the other part of the team goes to a wonderful place and is in the lap of luxury.
Quill, Gamora and Drax go to Ego's planet, which on the surface appears to be paradise. Han, Leia, Chewy and C3PO literally go to a city that floats in the clouds.

5. The paradise is not what it seems. Ego and his planet try to kill Quill and his team. Darth Vader is waiting for Han and company in the Cloud City. Whoops on both counts.

6. The forest team tries to rescue the part of the team in paradise. Rocket and co. go to Ego's planet to try and save Quill. Luke goes to the Cloud City because his friends are in trouble.

8. Both the dads killed the main character's mom. Ego killed Quills mother with cancer. Darth Vader broke Luke's mom's heart when he turned to the Dark Side, which killed her (somehow. Of course, Padme had to have known Anakin had some anger issues, he did kill all the Sand People, even the women and kids).

***SUPER BONUS THING THEY HAVE IN COMMON***

11. They are both sequels that at least some people think are better than the first movie in their respective franchises.

I really hope there are teddy bear looking aliens that turn out to be cold blooded killers (Ewoks) in the the 3rd Guardians of the Galaxy movie.
post by JG at 2:08 PM

It's been a weird few days in Dallas to say the least. So saddened by what happened here and all the events that have proceeded us getting here. I haven't felt like this-numb, in shock, concerned-in a long time. I have also been encouraged the last few days by the voices of reason that have spoken out against all types of violence against anyone anywhere. I know and believe we will not let a few bad people and terrible acts weaken and divide us, whether here in Dallas or across the nation. What happened here, I believe, will make us stronger and united in our resolve to overcome violence and mistrust with communication, understanding and peace.

And one last thought thought, Lieutenant Governor Dan Patrick should stop talking. About anything. Forever.  In other words, he should be voted out of office and he can suck it.
post by JG at 8:04 AM

May the 4th Be With You, Always

The Force Awakens v A New Hope: 18 plot points are the same. EIGHTEEN!  JJ Abrams pulled a Wrath of Khan with the Star Wars franchise. By that I mean, we shouldn't be surprised that JJ Abrams borrowed heavily from A New Hope and the beginning of Empire Strikes Back. He remade Star Trek II: The Wrath of Khan (and called it Star Trek: Into Darkness) and no one called him on that so why not recast and tweak A New Hope?

To be clear, I liked Force Awakens OK. It's just startling how much they based the story on the original movie.
post by JG at 5:10 PM

How to reboot the #FantasticFour movie the right way:

When they again reboot the #FantasticFour movie series (which they will) they should set it in the late 50's to early 60's space race era & stay true to the source material. For better or worse Reed is an egotistical, chauvinistic genius Madmen-type super scientist that steals a rocket ship and gets them all (Sue, Johnny and Ben) to go along with him. And they get irradiated by cosmic rays and get their powers. Then they battle Dr. Doom, Reed's old rival, who is a despot ruler of Latveria. Doom was scarred back in college and injured when an experiment he was conducting goes wrong. He blames his classmate Reed for the experiment's failure. At the end of the movie the FF defeat Doom but only by pushing Doom into the Negative Zone. Problem is they get sucked in with him.

TedCruz.com not run by Ted Cruz. If he can't run his own name's website can he be trusted to run the USA?
post by JG at 9:11 PM

Yup, pretty much the 1st step towards a Star Trek replicator

"I don't think Hillary Clinton is going to run for president." Said every other Democrat thinking about running that is in self denial.

And what happens when the program decides it doesn't like us anymore?

Bill Gates is worried about AI and he's a smart human, right?
post by JG at 11:39 AM

I think my phone was on acid when I took this photo of Congress Ave. in Austin 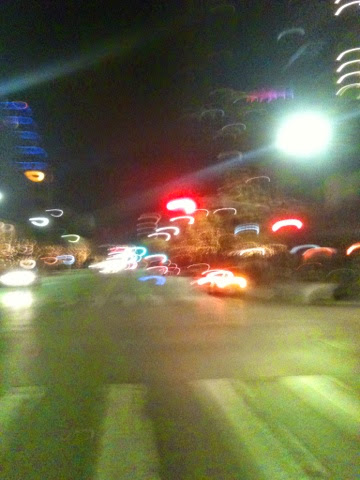